By SabithDecember 1, 2022No Comments3 Mins Read 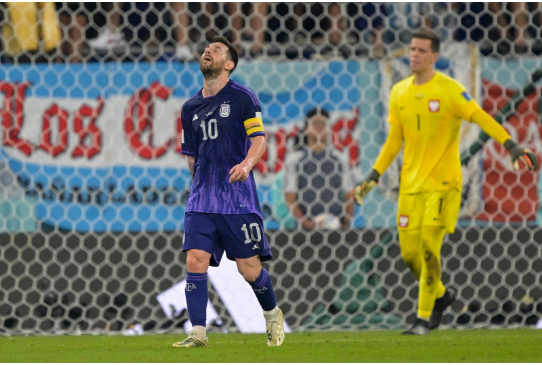 Lionel Messi becomes the second player to miss two penalty kicks at the FIFA World Cup after Asamoah Gyan, as Argentina qualifies for the quarterfinals.

Argentina managed to survive the group stages at the FIFA World Cup Qatar 2022 after having a horrendous starting game. Argentina beat Poland with 2-0 score to qualify for the quarterfinals from Group C.

While the match ended with smiles for the Argentinian brigade, the star face, Lionel Messi, set an unwanted record during the game.

Wojciech Szczesny and Lionel Messi both set a record

This was the second time the left-footed genius had not converted a penalty, setting an unwanted record. Such a feat has only been achieved once previously by Asamoah Gyan, who missed two penalties out of four.

On the other hand, the save also helped Szczesny set a record of being the second goalkeeper to concede and save a penalty.

Before the game, it was only two goalkeepers who stopped non-shootout penalties. Jan Tomaszewski from Poland did it back in 1974, and Brad Friedel from the US replicated the scenario in 2002.

While the Argentinian skipper made a decent shot towards the left side of the goal, Szczesny managed to get a firm right hand to the ball. This deflected the ball to award a corner to the team while Poland made a mini-celebration.

Messi’s stress did not last for long as Alexis Mac Allister scored a goal from Nahuel Molina’s beautiful cross as soon as the second half commenced. Julian Alvarez followed Allister in the 67th minute, sending the ball to the top corner for the second goal. Argentina managed to restrict their opponents, ending the match at 2-0.

Despite the missed penalty, Argentina managed to cruise through the match, thanks to Julian Alvarez and Alexis Mac Allister. It has been a rollercoaster ride for Argentina that started with a crushing loss against Saudi Arabia.

After the initial loss, the team required inspiration against Mexico, which Messi delivered. Now, the fated competition between Lewandowski and Messi has also resulted in the Argentinian’s favor.

However, Poland also made it past the elimination stage as Mexico ended Saudi Arabia’s dreams with a 2-1 win. The goal difference was the ultimate deciding factor between the teams, helping the Polish team keep their World Cup hopes alive.

Now, ten countries have made it to the Round of 16, namely:

The stakes get higher, as only six spots remain for the teams.