EarthLink Vs Frontier – Which is the Best?

By SabithFebruary 21, 2022No Comments5 Mins Read 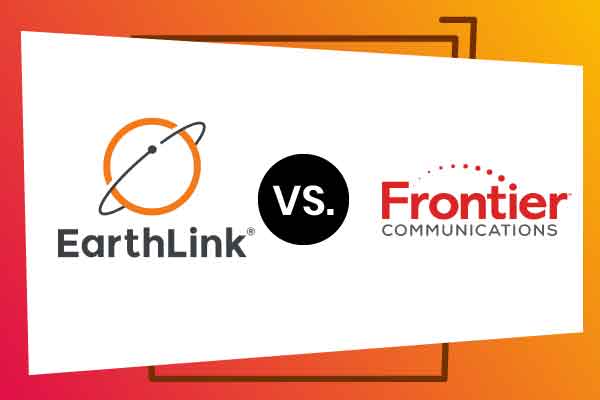 ISP is getting more competitive by the day. Customers are confused as internet providers are throwing similar features and competitive pricing schedules to win among their competitors. From Spectrum internet cable and Frontier plans to EarthLink deals and Cox bundles, choosing the right deal that addresses all the online preferences and needs is not easy!

Furthermore, in the current scenario, there’s more to a quality ISP than providing blazing speeds at an affordable price. Modern customers want it all! They want efficient and responsive customer service, lucrative bundling options, no contracts, and additional perks.

So, if you are struggling to choose the right ISP for yourself, this Frontier Vs EarthLink review might come in handy. Take a look!

EarthLink boasts of being the largest DSL provider in the United States. Recently, they have upgraded their DSL to HyperLink. They are now offering blazing speeds and fiber internet connections. EarthLink is currently servicing over 37 states. And their fastest internet speed tier goes up to a whopping 1000 Mbps.

Frontier offers speed tiers from 6 Mbps to a massive 1000 Mbps. Its monthly pricing is as low as $27.99 a month. In 2016, Frontier was able to buy a large chunk of the famous FiOS. Today, their service coverage area includes over 29 states. Frontier offers DSL, copper internet, and fiber optic connections for users to choose whatever suits them the best.

After this brief intro, we will be evaluating both the aforementioned providers according to the basic merits to know their efficacy. Let’s dig in.

EarthLink offers a range of different customized plans to address the needs of users with low, medium, and high internet usage. The highest speed tier that EarthLink offers is up to 1 Gbps. And the lowest speed tier is as much as 30 Mbps. Other plans have speeds around 50 Mbps and 100 Mbps.

As far as the pricing is concerned, it ranges from $59.95 a month to as much as $99.95 a month. These are general prices. The official website of EarthLink urges its users to call for pricing as it varies according to the location.

Frontier offers both DSL and fiber optic connections. The speed tiers offered by DSL connection range from 3 Mbps to 115 Mbps. While the fiber optic speed tiers are 500 Mbps and 940 Mbps. If you hail from a family of heavy internet users, then fiber optic internet plans are great for you. They support all sorts of online activities like streaming, gaming downloading, video calling, and so on.

If we compare the plans and pricing of both providers, the highest speed tier is more or less the same. However, Frontier’s monthly pricing is more affordable than EarthLink’s.

EarthLink deals usually come bound in a 12-month contract. If you decide to unsubscribe during this 1 year, you will have to pay early termination fees.

However, Frontier doesn’t chain its customers in a term agreement or contract. There is an option of availing of a locked-in price for two years. But it totally depends on the customer’s consent and choice. If you choose to have this contract, you will avail of a good discount for two years. However, you will have to pay early termination fees if you choose to unsubscribe before the period of two years.

Modern customers are no longer comfortable with the concept of limited data. We use the internet every hour of every day. And if you have to worry about reaching your data limit then it is quite bothersome.

Most ISPs do not impose data volume restrictions. And fortunately, both Frontier and EarthLink do not have any data caps. This means you don’t have to worry about speed throttling and hitting your data limit.

Customer service performance is becoming more important by the day. Customers expect customer service reps to be at their beck and call whenever they experience a glitch or have a query. They want effective customer service to be an essential plus with every product they buy and every service they subscribe to.

Whereas, EarthLink doesn’t have any rave reviews. It’s hard to find any good feedback. EarthLink really needs to up their customer service game if they want to stay on top of the competition. Because as mentioned earlier, customer service effectiveness is very important for contemporary clientele.